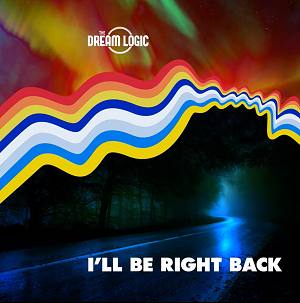 The Dream Logic “I’ll Be Right Back” (SINGLE)

“I’ll Be Right Back” from New York’s three piece The Dream Logic is the latest single from this rising force in the fusion/jam band vein. They don’t overwhelm listeners with batteries of sonic power, but you hear plenty of muscle throughout this track. Much of it comes from Camille Gainer’s on point drumming setting a tone throughout the piece. She plays with loose-limbed dexterity, yes, but she has an abundance of snap as well and her rhythm section partner bassist Jerry Brooks lays down authoritative bass lines answering her.

I love how guitar is used in this song. The instruments and lyrics alike benefit from a percussive quality unlike much of what you hear in modern rock and pop. It is a lean and sinewy arrangement, as trios often produce, and they give the impression of a musical unit capable of turning on a dime. “I’ll Be Right Back” doesn’t have the customary bells and whistles many bands feel compelled to saddle their material with; any flash they demonstrate during this track is fully functional rather than ornamental.

The chorus is a high point for me. The Dream Logic generates a lot of momentum building up to that moment and the best part is how they push listeners just enough without ever over-inflating the track. There’s no bluster in their presentation. “I’ll Be Right Back” gets down to business from the start and ratches up the intensity leading into the first chorus. Later choruses have nearly the same impact.

Compo has penned a great lyric for the track. It stands out from the outset and its mix of near-caustic humor and bitter observation is unique for any track, any genre. It’s a lyric, as well, that you can pin multiple interpretations onto without ever straining credibility, though it certainly has a specific meaning for Compo. He dramatizes his writing without ever descending into camp and the vocal melody enhances each line.

Camille Gainer’s drumming, mentioned earlier, is a definite strong suit for me. They achieve a remarkably full sound despite only three musicians working on the track, but there’s airiness in the song attractive for listeners. I enjoy what Gainer doesn’t plan more than what she puts down. Some drummers would unnecessarily clutter the performance with extraneous fills and etcetera but not this band.

They’ve honed their craft. It has plenty of snap but, nonetheless, there’s nothing about “I’ll Be Right Back” that sounds like a band winging it. This song sounds like the result of a year’s long process until the confluence of skill, fun, and a generous dollop of the personal struck the perfect note. Everything comes together with this track. It shows a band that’s riding a creative high, without question, and shows no signs of subsiding. It ends The Dream Logic’s year on a peak. 2022 promises to be another banner year in the band’s relatively short existence and you won’t hear any evidence during “I’ll Be Right Back” of hitting an artistic wall anytime soon.

The music of Dream Logic has been heard all over the world in partnership with the radio plugging services offered by Musik and Film Radio Promotions Division.  Learn more https://musikandfilm.com