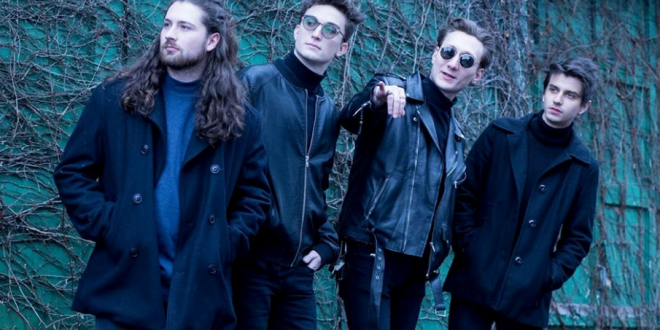 From the very moment that it first appears to us, the vivid vocal track that penetrates the master mix in “Proud,” one of The Vics’ new singles due out this month, is entrancing us with its otherworldly sway. Like a pendulum inducing hypnosis, it ebbs and flows with an evasive strum of acoustic guitar, slipping through the cracks between the percussion and bass, eventually finding a home at the forefront of the track. The groove in this song isn’t quite as punishing as it is in the bluesy stomper “Fourth and Clay,” but let’s face it – very few are. In “Fourth and Clay,” the first of the two singles that the band is dropping from their most recent trip to the studio, an old fashioned, almost arrogant rock n’ roll drawl injects the track with a lot of bombast and cinematic flare, but The Vics make sure to contain the song’s edgier points by framing them in a rambunctious hook that lingers in our minds long after the music has stopped playing. No matter which single you pick up, you’re bound to be taken aback by what this phenomenally talented Pittsburgh crew is coming up with in the studio these days.

The percussive swing in “Fourth and Clay” is as violent in essence as the vocal is riddled with passion, but it doesn’t suffocate all of the magic transpiring from the string section at all. You couldn’t stamp out the firestorm brewing in these guitar harmonies even if you wanted to in; they’ve got too much muscle, and frankly, too much vibrant color, to be denied their proper place at center stage. “Proud” puts a lot more stock in the relationship between our singer and the groove-laden beats that he seems to command with every syllable he utters. It’s not all that common in contemporary pop music, but the arranging technique that The Vics employ in this track has a long history with jazz and classical artists, most of whom typically spend a lot more time developing their compositions than the average pop group does. This band is constantly expanding the scope of their creativity, and the results of their hard labor are on full display in these two infectious singles.

Having yet to be disappointed by anything that they’ve released so far and, to be truthful, finding their most recent work to be among the best of the year as it stands at the moment, I would expect nothing but greatness out of The Vics moving forward. Their place in the hierarchy of underground rock music is constantly shifting more towards superstardom, and in “Proud” and “Fourth and Clay,” they give us a treasure chest of tonality that more than justifies all of the momentum they’ve been picking up in anticipation of 2019. They’ve got just enough pop polish to appeal to disciples of the FM dial, and sport more than enough attitude to discredit the very notion of the group selling out anytime soon, and in an era where those two qualities aren’t usually found within the same band, that makes them a very exquisite find to put it mildly.