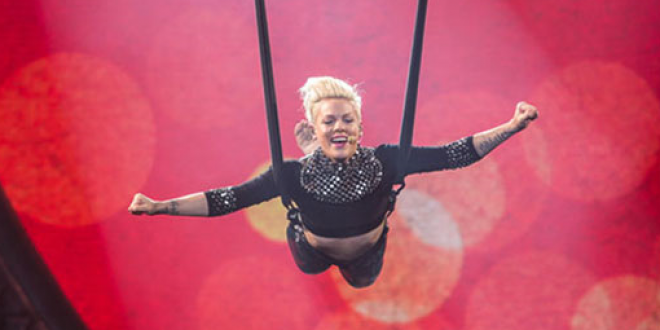 Pop-rock maven Pink took her talents to new heights at Capital One Arena on April 16 by combining her unbeatable vocal range with artistic aerial performances for the Washington, D.C. show of her “Beautiful Trauma” tour. Accompanied by a diverse dance troupe and band, Pink encouraged empowerment, self-worth and an end to exclusivity while redefining the concert experience.

Bleachers, an indie pop group vaguely reminiscent of The 1975 and The Beach Boys, served as P!nk’s opening act. The band, whose “Alfie’s Song (Not So Typical Love Song)” was recently featured on the “Love, Simon” soundtrack, showcased its instrumental range and switched between guitars, drums, pianos and saxophones throughout its set. Along with hits like “I Wanna Get Better” and “Wild Heart,” Bleachers included a cover of Fleetwood Mac’s “Go Your Own Way,” the members’ boyish charm and smooth vocals providing a welcome juxtaposition to Pink’s theatricality.

Following Bleachers’ performance, the audience was awakened from its set-change slumber by Whitesnake’s “Here I Go Again” echoing throughout the arena. Suddenly, the luxurious magenta curtains masking the stage dropped, revealing Pink rocking back and forth on a gigantic crystal chandelier and singing “Get the Party Started” from her 2001 album “M!ssundaztood.” While she paused for a dance break, the audience had a moment to take in the many elements of her stage, including the treadmill runway extending far into the crowd and numerous backup dancers.

After quickly donning a royal coat over her sparkly bodysuit, Pink launched into “Beautiful Trauma” from her 2017 album of the same name and “Just Like a Pill” from “M!ssundaztood.” Showing no signs of exhaustion from her dance break, P!nk tore through the songs enthusiastically while maintaining perfect pitch, setting the precedent for a night of unimaginable performances.

As if her dazzling dance moves and stellar vocals were not enough, P!nk impressed with her genuine compassion and generosity, as she is often addressed the crowd as though her audience members were old friends. She often paused to collect Barbie Dolls — most likely an allusion to her song “Barbies” — and stuffed animals from fans or to tell the crowd about a tooth she recently chipped. Empowering videos encouraged the audience to bridge racial, economic, gender and political divides and to embrace imperfections, providing segues into the songs “What About Us” and “F- -kin’ Perfect.”

Pink also made a point to showcase the individuals who helped make her tour possible. During “Funhouse,” she paused to introduce her backing band, not just with her voice but also with striking graphics on the screen behind her. Toward the end of the show, Pink also highlighted her dancers, giving each a moment to showcase his or her signature move. Even after the lights came on in Capital One Arena, an “end credits” list rolled on the screen, acknowledging everyone from P!nk’s choreographers, the Goldenboyz, to her bus drivers. These extra efforts conveyed Pink’s kind heart to her audience members and reminded them that a tour is about more than the main star.

Rather than omitting her songs containing guest artists, Pink employed creative measures to incorporate the duets into her live show. For Eminem’s part in “Revenge,” a giant blow-up balloon of Eminem sprung up on stage, adding humor to a song embodying the bitter feeling evoked by a breakup. Additionally, Pink’s live rendition of “Just Give Me a Reason,” featured fun.’s Nate Ruess singing on a vintage television screen. Alhough these songs could have been omitted, their inclusion heightened the overall artistry of the night.

For her final performances, P!nk brought all the elements of showmanship together to write a flawless ending to her D.C. story. She teased a finale with “So What,” an edgy smash hit from her 2008 album “Funhouse.” As the red lights flooded the stadium, Pink hooked herself up to a harness, teasing the audience for the circus moment to come.

When the chorus hit and the beat dropped, Pink propelled far into the audience, doing backflips on her harness while keeping her vocals crystal clear. When Pink finally landed on stage after her voyage around the stadium, she appeared neither out of breath nor sore — a testament to her athleticism and vocal ability.

Although her audience would have been more than satisfied with that ending, Pink returned to the stage donning a casual all-white ensemble to perform “Glitter in the Air,” which is also from “Funhouse.” Even with the elaborate set and compelling dancers stripped away, Pink shone on her own, letting the music speak for itself.

With a kiss goodbye and a heartfelt “thank you,” Pink calmly left her audience to reflect not only on the power of the night’s music and dance numbers, but also on her message of love and positivity. In a time when the divide between elaborate performances and meaningful messages is stringent, Pink proves theatricality, lyricism and inclusion are not mutually exclusive.